Add an article with images and embed videos.

A collection of images

Upload a video or embed video from Youtube or Vimeo.

Upload your audios and create your playlist.

The energy industry has long met demand by varying the rate at which it consumes fuel. Controlling the output of an oil-fired power plant is much like changing the speed of a car — press the accelerator pedal and more gas flows to the engine.

But the wind cannot be turned up or down. Smart software can make wind farms more efficient and responsive. Computer models can predict wind speed and control the number and capacity of turbines in operation to meet energy demand. Low-vibration designs and health monitoring would enable turbines to run more smoothly, avoiding expensive failures of gearboxes and other components whose replacement can cost hundreds of thousands dollars and take days.

Optimizing renewables requires data: on device performance, energy output and weather predictions, seconds to days in advance. Vast quantities of information are collected by turbine manufacturers, operators and utility companies — yet hidden in their archives1. The information is prohibitively difficult for anyone outside to access.

It took me two years of discussions with different energy companies and the signing of several non-disclosure documents to obtain enough data to carry out a study on the performance of wind farms in Iowa, for instance. Wind-turbine data are usually recorded every 10 seconds and averaged over 10 minutes (see 'Poor performance'); getting higher-frequency data involves obtaining permissions from sensor manufacturers. Even basic data such as wind speeds and historical data on turbine operations were initially impossible to obtain. By approaching different partners and developing data-sharing agreements, we eventually gained limited access to wind energy data.

The lack of data sharing in the renewable-energy industry is hindering technical progress and squandering opportunities for improving the efficiency of energy markets. I call on the energy industry to follow the examples of defence, commerce and health care and share its data openly so that researchers can design better solutions for powering our planet.

There is money to be made. Academic and industrial researchers need first to develop suitable wind-farm management models and prove their value. Software companies can sell energy and weather- monitoring and -predicting systems. Large technology companies such as the Hewlett Packard Enterprise or Google should establish wind-energy divisions for planning and balancing energy across different states and countries, as General Electric has done in wind-turbine manufacturing. 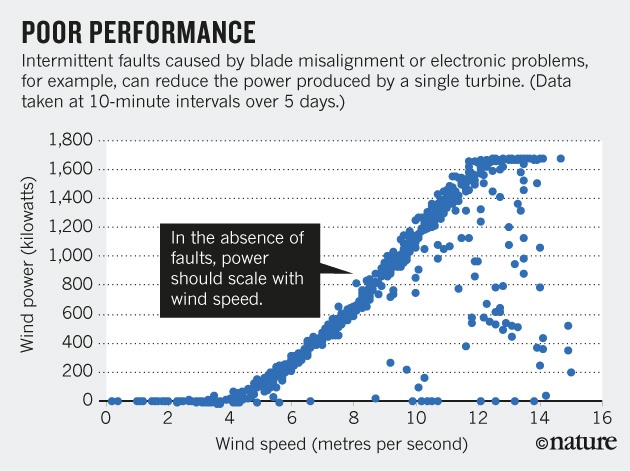 Leveraging renewable-energy data makes economic sense for a product — electricity — that is universal. Unlike other commercial industries, energy utilities do not compete on the basis of product quality but on generation and distribution processes and business operations, which are the greatest beneficiaries of big-data mining. Efficient renewable-energy plants equipped with software for accurate power prediction and responsive management will be able to take advantage of real-time, or 'spot', energy prices — supplying more when prices and demand are high and less when they are low. This extra profitability will encourage more firms and utility companies to acquire renewable-energy assets.

'Balancing authorities', usually non-profit, governmental or private organizations, match the expected demand for energy with the production scheduled by utility companies hours ahead of generation. National, state and regional meteorological agencies and weather forecasters accrue radar data and run numerical weather-prediction models every 1–3 hours to produce forecasts and parameters such as wind speed.

New sources of data are emerging. The wind industry is experimenting with using sonar and laser-based lidar measurements to anticipate the speed, direction and turbulence of the wind approaching wind farms. Some utility companies fly drones over their farms to check turbine blades and measure wind speeds and directions to improve power prediction and to anticipate fluctuations over minutes to hours.

Renewable-energy producers operate in isolation. If industry players pooled their data and monitoring resources, they would all benefit. More-efficient and lower-cost wind-turbine designs could emerge, allowing turbines to last longer and produce more energy, and allowing output to be more accurately predicted. For example, combining data from wind farms in different US states would dramatically improve the accuracy of predicted hourly changes in power production.

Experiments that are impossible with a real wind turbine or a farm can be simulated on a digital replica3. Different control strategies can be tested for maximizing and smoothing the energy output. Conditions of components and subsystems could be analysed to lower maintenance costs — the most significant expense of wind-energy generation4. Active control of turbine vibrations could be studied. More stable turbines are less likely to fail and could be run beyond their current upper speed limit (usually around 20 metres per second) to produce more energy. The impact of atmospheric conditions on wind-farm sites and energy production could be studied.

Controlling wind turbines with data-driven software could, models show, increase energy production by at least 10%, and gains of 14–16% are possible. Increasing the maximum running speed could easily add another 10%. Wind-farm maintenance costs could be cut by 10% with a data-driven health-monitoring system. 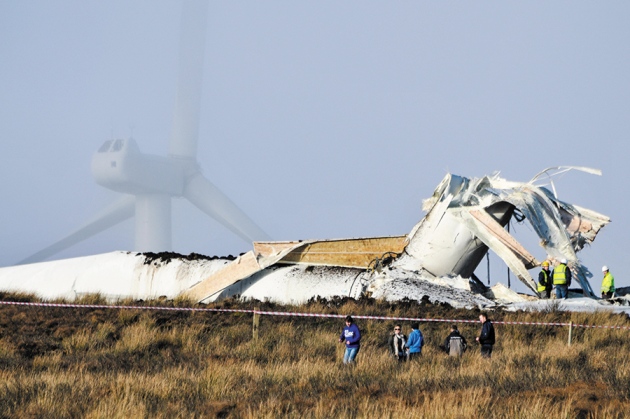 Turbine failures, resulting from gearbox and other component faults, could be avoided by sharing data.

Yet the wind industry remains largely oblivious to data science5. A few utility companies are setting up in-house data-analytics teams, but the benefits of working with academic researchers and others are not recognized. Although models and software that do not directly impinge on turbine operations — such as a graphical display of a turbine output — are broadly welcomed, direct interventions are impossible.

I have been unable to test control solutions developed in my Intelligent Systems Laboratory at the University of Iowa in any commercial settings. Even public utilities and colleges that own and operate wind turbines ended negotiations once they realized that their insurance and maintenance contracts would have to be modified. Wind-turbine insurance contracts tightly prescribe operating conditions and safety aspects, sometimes requiring turbines to be equipped with specific sensors (such as for tower vibration and rotor speed).

Potential for exposing flaws and poor design practices is another obstacle. Manufacturers may not want to reveal performance metrics that are covered by warranty terms or design details that might point to patent infringements. Competition is a worry.

Other sectors do better. Defence, commerce and health-care organizations have developed processes for sharing data with the research community while maintaining confidentiality and security. Some have created benchmark data sets to test data-analysis algorithms. Others run competitions to solve specific problems. For example, in 2006, the television- and film-streaming service Netflix offered a US$1-million prize for an improved algorithm to predict rating scores of films. In 2011, the US National Renewable Energy Laboratory (NREL) ran the Round Robin project, in which they shared high-frequency vibration data from a healthy6 and a faulty gearbox with competing teams to discover the most accurate ways to diagnose faults. It has been estimated that the value of the voluntary contributions to the project from the 16 participating teams (including the Intelligent Systems Laboratory at the University of Iowa) was worth between $2 million and $3 million.

Non-disclosure agreements outlining the specifics of data sharing and results dissemination are used in data-intensive projects. Consumer-goods company Proctor & Gamble, for example, reveals information about a product (a new shampoo or a shaver, for instance) early in the design stage to potential customers, whose feedback improves the final design. On social-media platforms such as Facebook, users determine the scope of information sharing.

The renewable-energy industry should adopt similar practices. First, it needs to decide which data can be shared and at what risk. Wind speed and direction, for example, could be released given that anyone could measure them. Although data on the real-time energy output of an entire wind farm should be rightfully protected for competitive reasons, sharing power produced by one or a few turbines would not compromise business value. When necessary, data could be transformed or anonymized; for example, by reporting relative percentage changes rather than absolute power values.

Wind-energy associations in Asia, Europe, South America and North America should facilitate the data-sharing discussion. A summit of these players should define a path to open-access data as follows.

First, make all renewable-energy stakeholders aware of the problems and of the benefits of data sharing. Invite representatives from other manufacturing and service industries to present their data-sharing practices.

Second, develop data-sharing protocols and governance structures. US Department of Energy laboratories such as the NREL and Sandia National Laboratories could lead this effort because they collect renewable-energy data from some wind-farm operators for their own studies. Collecting data at higher frequencies (in some cases), at fraction-of-a-second intervals, from more utility companies and facilitating open access to them would be the next step. Although data collection should ideally be global, in reality, most useful results would be regional.

A chip made with carbon nanotubes, not silicon, marks a...